Samantha Thompson is a fellow student at Conestoga Hills Middle School who Mark Hollander dates during the series.

She is Marks's next door neighbour and girlfriend for most of the first season. She is a popular girl in school, is a cheerleader, and dates Brett Ramirez early in the series but breaks up with him to date Mark, though they remain friends. Samantha is a pragmatic, sensible and forward girl who has a determined attitude. She is fascinated Mark's odd behaviour and pursues an answer, though never gets one.

They break up after a disguised Lady Illusion ruins their relationship, though by the end of the first season they reunite. However, Samantha goes to a boarding school in the second season and dates a boy named Jeremy. She returns home and supports Mark dating Kat, ending their romance on good terms

Mark's girlfriend who is always breaking up with him because Mark is always running away from her to help Ace Lightning without explanation. Mark is constantly trying to tell her the truth but is always interrupted by Chuck who for a time was all ways the third wheel. 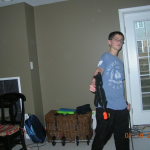